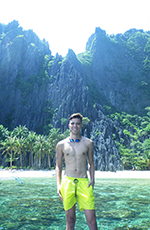 Nels (Scandinavian) Of the victorious people
Nelson (English) The son of Neil; the son of a champion
-The Complete Book of Baby Names (The 100,001 Best Baby Names) by Lesley Bolton

Yo. If there’s one thing that I’m physically proud of, it would be that I have a dimple on the left and is relatively tall (boo, that’s two). I’m not an expert of any, but if you beat me in badminton, tennis, and ping pong, I’ll probably dribble that basketball. Eccentric laughter is my ultimate weapon while good old insecurity is my archenemy. I rarely say no to a glass of beer. Been blogging since September 2004 and they’re all still alive (even extended).

When the street food you feasted on back in high s

Why is there a carbon copy? 🎼

When you get emotional from the K-drama you're wat

Avoid burning bridges; you may need to cross them

Developing a fascination for bridges.


Error: API requests are being delayed for this account. New posts will not be retrieved.

Beer & Skittles is taken from the proverb which I learned in my Japanese class. “Jinsei ha biru to kyuuchuugi bakari janai.” In English:

Life is not all beer and skittles.

The site’s original name was Flirt Wind, taken from the subtitle “I’m like a flirt wind” in the House of Flying Daggers. The early days were spent in GeoCities but when their ads became a nuisance, it was moved to FreeWebs alongside the redirection provided by Shim.net. In 2007 I bought flirt-wind.net, which eventually led to nelson.ph. Hosting?