What’s this year again? Golden Dragon, right? Oh, that’s Water. You see, this is what happens when New Year strikes and you intend to make some year-end post but find yourself writing nothing. Well, April’s here, and I’m about to turn another year around.

Despite all chances in the past, it was my first time to attend the Sinulog festival. On the night before my flight were the wildest parties. You know, the type that instantly makes you realize that next year you’ll be doing it again. Beers were splashed around as if the streets were beaches. Sadly, I had to call it a night at one o’clock. (Yeah, boo.) At the airport, my ATM card got blocked.

Thankfully, I borrowed money from friends before getting on the cab to the airport. That’s how my arse got saved from being left by the plane. In the darkness of the night, I had sunglasses on. :laugh: To my discomfort, the stewardess awoke me when I had just fallen asleep. Turns out the aircraft’s already landed and everyone’s already deplaned. 😯

It was time for a much awaited Hong Kong trip. UNFORTUNATELY, (yes, it has to be in CAPS) two of us didn’t make it while the other one did. Like her flight, ours was delayed too; moved to a different gate, bought something to eat, had our names called on our way back, and hurried to an already closed gate. :wtf: I’d bet my balls that we were called only once. They claimed there were three. We weren’t even given time to reach the gate when our baggage was already on board! Cebu Pacific Air was such a bitch. Their management sucks like a porn star. The days that were supposed to be spent partying in another country were spent on checking our friend’s whereabouts. It was her first time, after all!

On other news, a classmate’s daughter, who’s a goddaughter, celebrated her first birthday. Many people who promised they would go didn’t come. Seriously, it’s the most frustrating feeling when someone commits to you but end up not showing the slightest sign of life on the agreed schedule. One should at least have the decency…

…would be the month I never thought it would be. Every weekend was an official getaway! 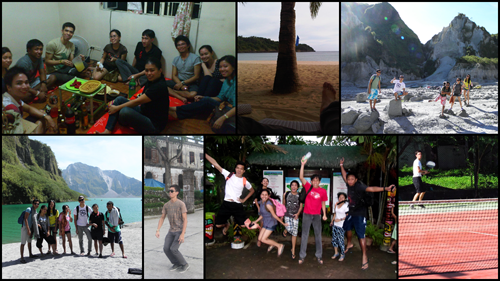 Tomorrow’s Good Friday. Repent in one way or another!