Yesterday I was able to meet with my closest Chinese classmates from my postgraduate certification course. Coincidentally, they’re my fellow PhilNITS passers. 😎 I may not have used, up to this point, the bragging rights for passing such deadly exam, but I will always be proud of surviving such monstrosity. Instead of Maginhawa for some “food trip” we ended up at SM North, where we had dinner at 4 Fingers. Funny enough, it was actually recalled as 7 Fingers, which would make one wonder where the other three went. :laugh: Over the meal we talked mostly about what has happened with our careers, and how things could end up the way you didn’t want them, like being assigned to a team or a task you never imagined you’d be doing very soon. I will have to agree completely on the struggle of motivating someone when you yourself is not motivated and the absence of an immediate superior for quite some time just when you need it the most… 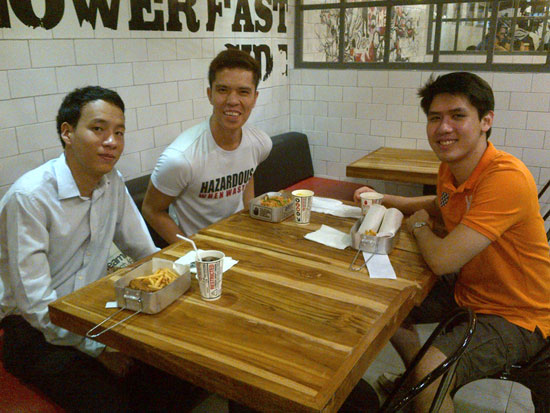 We watched Non-Stop starring Liam Neeson afterwards. Boy, that was truly suspenseful, I must say! When we were finally able to let go of our seats, we headed to Starbucks for more chatter, this time on travel overseas for the most part. Korea, I didn’t know, is a beer haven. Japan, of course, have porn everywhere. Then there’s this particular place in Taiwan where youths dwell, which also happens to be a party place of some sort. Someday! I’ll be there. When we parted I told them to sign up on Facebook for the love of God. Yeah, even until now I can only wonder what will make them do so.