I skipped World Literature today because I wasn’t able to read the drama piece to be discussed — “The Glass Menagerie” by Tennessee Williams. I think it was a confusing read. I only relied on soft copy from the Internet which has typos and indention that made it irksome to read, that’s why. I gave up reading it in the end. Before it I finished reading “Death of a Salesman” by Arthur Miller. Again, the copy was not that good. Not to mention how long it was! It’s sad, but it seems that I’ve lost the hang of reading. Come to think of it, I haven’t read a single book (those Harry Potter types) for ages. (sigh) I knew from my classmate that they had a fun discussion by re-enacting some of the scenes where our teacher (who happens to be male) took part as the character Amanda and the female and male students as her children Laura and Tom, respectively. According to my classmate, Amanda had to make the boys repeat some of their lines over and over again (over a scene where dialogues among characters were overlapping) because they were so lame but one. Neat, I would have laughed my heart out there.

My Tennis racket’s head cracked again. That’s the second time in one year. It’s really no wonder as both of them were only handed down and lent to me. But why? What must I do to prevent such a thing to happen? Could it be a sign that I should already retire from playing the sport at this young age? Not a chance, I guess. I’m still grateful that at least it didn’t crack during the sportsfest. I played with my partner this afternoon (using a borrowed racket) and guess what, after me telling him what happened, he noticed that his racket already has a crack and poof! It eventually cracked like mine. I finally saw our trophy after not attending the awarding ceremonies then (Mama scolded me for doing so). My partner brought it on court upon my request. Say simple but see cool. I’ll post pictures later… Been playing Pokemon Pearl by the way. Still as exciting as the other versions. The graphics are, of course, way better than the first ones. 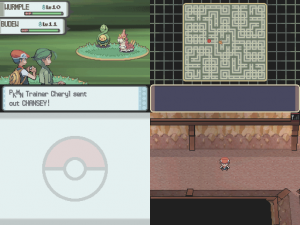 This is stupid, I still haven’t got any interest with my academics. Our teacher in two major subjects just left the country which makes life more light and idle. I don’t know his exact comeback but his mere absence is something that I didn’t really want. Help.