Down the Drain Archives

After yesterday’s Christmas Party (where the exchanging of gifts became possible out of nowhere) we went to Tomas Morato to seek more entertainment. Naturally, we ended up in a videoke room. Man, how I miss disco~ing… Anyway, the liquor’s still there so it’s absolutely fine. :laugh: I sang, like, only two songs because my throat was burning due to hard coughing and the room was filled with lots’a people (yeah, surprisingly). By the time we called it a night at four I was already sounding like a frog that my Japanese teacher said I had a UTI — upper throat infection.

The following day I got up at three and took off for the Lantern Parade an hour later. It has already begun and just as we arrived at the oval, our institution (or whatever you call it) was nearing by. I was spotted by my classmates so we eagerly joined. Watching one lantern after another didn’t bore me at all, especially when the Fine Arts studs entered the scene. Fate exhibited its cruelty on me as my battery emptied just as I was planning to take pictures ’til the end. And oh-ho-ho! The fireworks display made me realize that I can die already. Hail to the sponsors!

After watching the magnificent display I accompanied my classmate in meeting her roommates. After she left, I wanted to be alone and perhaps just take a few steps away from everyone’s happy faces. But no, I still found myself mingling with some classmates and even having dinner with them. Even so, the despicable and mysterious melancholy was somehow lifted. We left KFC around two. No beers for tonight, boys (which is good, since my throat spells a capital N and O). 😎

Oh, yes… December is only minutes away, and I just have to engrave a few remarkable happenings in this good old tsumaranai life. 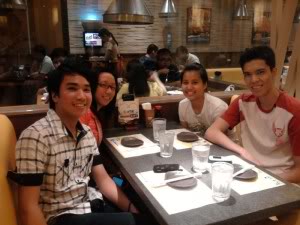 It seems this blog is turning into a photo blog.