A Night with College Mates

The PhilNITS exam yesterday was tough as expected. Okay, that’s all about it. On to the next topic…

Thankfully, as planned, I was able to meet up with my college friends who’re already earning. TriNoma was the meeting place. After rounding the mall to find somewhere to eat, we ended up at the same spot — Tokyo Tokyo. The rest of us were teasing the one with the highest pay, as he uses a cellphone with no Bluetooth capability. 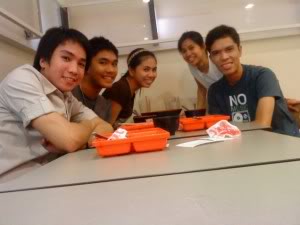 On our way to the next place to go, we stopped by the Big Brother House in ABS-CBN. Gerardo’s was only a few steps away. The place was crawling with people and we were stuck at a corner, directly being fumed by the aroma from the kitchen. Aside from the free pulutan, we had a bucket of unconsumed lights and sisig. It’s really annoying when orders are no longer accommodated because of too much occupied tables; you have to repeatedly call any waiter.

On our way home, two guys who hurriedly alighted the bus were pursued by another with a gunshot. I was watching curiously by the window but when the shot was made I immediately went back to my seat. Later people were saying it was a cop. What’s the story, morning glory?