A lot. Has happened recently. As usual, I’ve been drooling about blogging them as soon as I get the chance but…what can I do? I just can’t get enough. How’s April so far? Thought you’d never ask.

Today (technically, yesterday) was U.P. Diliman’s graduation. Our salutatorian finally made her way out of Accountancy. I attended her feast (yes!) together with another classmate. The idea of bringing a gift came in very late that we almost ended up giving her just a bottle of wine. How lame’s that? Thankfully, we managed to steal some time and pick up a shoulder bag on sale. When the food was served, I thought, “Will this suffice?” Turns out it was barely consumed. :faint: In the heat of the day, I had two. 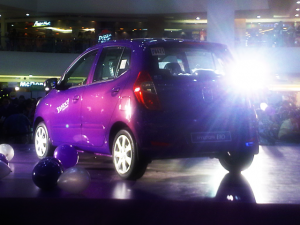 We parted ways when the plan of watching a movie with the graduate’s family didn’t push through. Also, everybody was already feeling tired. Still, because it was still early, I and my crime partner roamed TriNoma and ended up watching Source Code (and seeing that cool car above!). Against Inception? I’d vote for it. The concept of time travel or anything similar to it is just, you know, enticing. When we went out of the cinema I realized that I should’ve really gone to the university graduation in the afternoon because aside from the 19 y/o summa cum laude, the president was also there. I heard he was welcomed with a rally. Nothing new, really.