Six years ago, adrenaline rushed inside me as I was catching up on the manga of Hunter x Hunter (among those on my favorites list) after the anime was discontinued. With its remake three years ago and the latest episode, it all came back to me again. Seeing a manga page in action and full colors is absolutely more than what a fan can ask for. 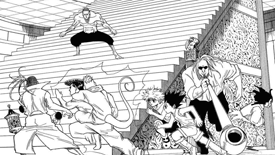 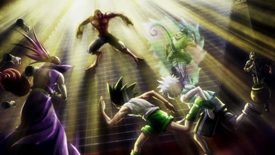 What was supposed be a post ostentating my first travel overseas (Hong Kong and Macau) last February turns out to be on the gadgets that I’m drooling over as we speak (well, technically, I’m the only one speaking—and drooling—here). Failing to secure a copy of every single picture we took makes me pitiful, and it made me realize that it’s time I get myself a camera. I should have at least borrowed one to secure my own captured pieces of the getaway. Anyway, ‘nuf said.

After coming back from the trip I rushed to YouTube to get blown away by the hands-on video of the Samsung Galaxy Camera. The device is badass, that not owning one would mean I’m better off being allergic to alcohol. If you haven’t seen it yet, go see it. As for the Curve 9360, well, I intend to make it the replacement of my Bold 9700 which, after two and a half years, rested in peace one night after I went juggling shot glasses. (Yeah, yeah. You don’t need to lecture me.) It’s obviously camera over cellphone this time.

Last Friday I dropped by Electroworld and, as luck would have it, they have the two gadgets, both payable in 12 months. I’m just on my first month of paying the Seagate portable drive but I’m actually willing to gamble even more. I’m looking at it as restraining the plastic money which has done nothing but provide me with an endless set of bills. (I actually need to have it reactivated as it’s been rendered unusable due to some suspicious transactions they have monitored recently. You don’t say?) Lastly, I can only hope that my five year-old Acer Aspire 4715Z won’t falter. That would be a totally different story.